This New Year wasn’t different from any other. I did find out one interesting fun fact, in Pittsburgh instead of their ball dropping their ball rises, which was kind of cool. Symbolic of a new year beginning.Skipping ahead to my first workout of 2014 was this Sunday Jan 5th, which included a tweet about a spin interval tagged as “this is happening now!” well it started out that way until a spin class took over the room I using. Which posed a problem….I all of sudden got very self conscience of what was happening around me and who was watching. I was already a quarter ways into my routine with some spicy intervals when the instructor; thankfully a knowledgable athlete took command of the class. He called me out and asked if I would join the routine. Not sure about his “end game” I acknowledge I would participate in the class.

Generally I dislike spin instructors as they haven’t a clue about Zone work, endurance, and especially recovery. Spin classes might be fine for some but it seems like a 45 minute torture fest with no purpose, people spin their legs at 130 rpms or more, jump up, jump down, skip, position 1-2-3 the list goes on. Luckily this instructor was different he understood Zone work, and VO2 Max, LT (Lactate Threshold). He proceded to run us into the ground, by the end of the class I was as done as the pork chops I had for dinner. We did 7 reps of 2 minute 30 second intervals at his intensity levels. He walked around the room and made sure people had the proper resistance on, and challenged many to increase their cadence or resistance. My legs were spent after the 45 minutes with him, so my hat is off to the first spin instructor who fried my legs for 2014, I will be back next week.

So I tempted you with the mention of pork chops, they were GOOOOOOD. I made cooking light’s Orange Mustard Glazed Chops, pretty simple recipe to follow. We paired it with mashed potatoes and roasted brussle sprouts as you can see in the images below. It was so good I am actually having the leftovers for lunch as I type this post.

Cooking instructions were not straight forward. I felt like I needed to reread the receipe over and over. However it was totally worth the extra work.

Cook instructions. (here is how I would tell someone to make this)

In a small pot, mix and bring to a simmer orange juice, zest, maramalde, Mustard, salt&pepper to taste

In a cast iron pan heat 1 tbsp of canola oil and swirl to cover pan, while that heats up add 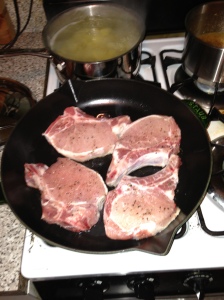 salt and pepper to one side of pork chops and lay salt&peppered side down in pan, then salt and pepper top of chops in pan (sear for 2 minutes), place a sprig of rosemary on top of chop and then flip keep rosemary sprig under chop. (to check if chop is on track there should be browning or golden edges to chop). sear other side of chop for 2 minutes. Turn flame off and pour small pot mixture over chops,

add quartered onion around the pan and place in over for 8 to 10 minutes. Use instant thermoiter to confirm temp is 140 degrees.

Remove chops, onions, rosemary sprigs from castiron pan and place on serving platter. Take the two limes and squeeze juice into pan and bring to a simmer so the liquid left in the pan is syrup-esk. Pour this over chops and serve.

Potatoes, Yukon Gold bring to boil use a ricer to make them fluffy, we used 3 tbsp of butter, a splash of skim milk and then a 1/2 cup of Veggie stock. I always chop chives as a topper, we find this mashed to be as tasty and healthy of a proportion as we are comfy eating.

Brussles are in a separate non stick frying pan with Olive Oil and salt, high heat for 4 minutes flipping to prevent burning but you want to achieve a golden hue.

Thats it, my legs were as spicy and done as these pork chops. The key take away from both experiences was I did not panic I adapted both receips and kept my cool. I worked out the kinks and overcame the little things. Not bad for a Pork Chop Sunday. 😉