To a triathlete their bike is a reflection of the type of athlete or person they want others to perceive them to be. Few things are as frequently fawned over as a the newest sleekest fastest most bada$$ bike in transition. Immediately other athletes yield to the owner. However, while money can buy you one sweet ride, it doesn’t always mean you can ride it. This is not were I began my journey for a new bike.

On Nov 15, 2012 I went into surgery to have my hip replaced. Fearing the worst, prepared never to run or ride again I counted back from 10. As the music in the operating room faded I told myself that when I get back out there I would get a comfortable bike that would allow me to return to the triathlon lifestyle I thrived within.

My first time on a bike was under the watchful eye of one of New York City’s most gifted Physical Therapists and my best friend, Sasha Zill with Cornerstone PT. As I saddled up on the stationary bike I tensed up and worried this was the defining moment would I ride a bike again? Would the pressure on my pelvis and hip replacement be too much to handle? Beginning to push the pedal I found light resistance and my body begin to adapt to the correct riding position. I spun for 5 minutes, iced down and my spirit burst out. I was on the road back!

Fast forward through months of PT and as I returned to a real bike I was worried a true aero position would not be comfortable for my new hip. We took countless measurements and did a bike fit worthy of only a few elite athletes. Once I was in a position I could hold, we headed outside. My ride wasn’t the same and I was fatigued on the bike and couldn’t stay tucked in as long as I previously could, and maybe I would never find that position again. I had to be happy with what I could manage.

During the winter I met Ryan with the Rev3 Multisport Store and over the course of weeks we spoke about bike options. I provided Ryan with my computerized bike fit numbers. Now, I should say I am not a big online shopper for new things. Many items I feel you need to test out before you buy it, and for sure a bike would demand this method. Ryan returned to me with some details about (QR) Quintana Roo’s CD0.1 and how versital the bike position options are with this bike. It sparked some interest, and as we exchanged emails over the history of QR I found comfort with their bike build ethic and focus as the a triathlon primary bike manufacturer. Ryan, confirmed that the bike could be setup to match my exact measurments from my bike fit. This sounded all to good to be true.

I analyized my options and spoke with fellow athetes. I decided to visit a local QR dealer and take it out for a test ride before purchasing online. Again, I just couldn’t pull the trigger on this big ticket item without at least feeling out the ride in person.

I called Ryan that same day with my opinion. I still had hesitations about buying online or over the phone at this point. Through multiple photos, and conversations the Rev3 Multisport Store outfited the bike exactly to my specifications, packed it up with as much protection as you can give a newborn baby and put my Quintana Roo in the mail.

A few short days later my new whip arrived! The box was gigantic. 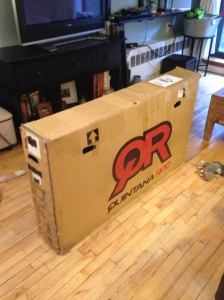 I now had the fun task of assembling the bike. This might take a shop a half hour or less. I borrowed a friend’s bike tool box and got my hands dirty. 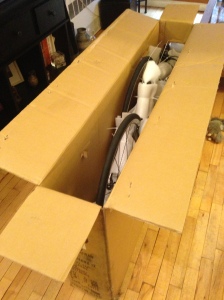 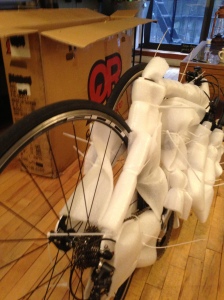 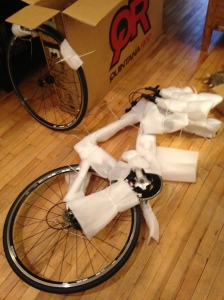 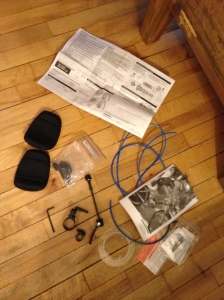 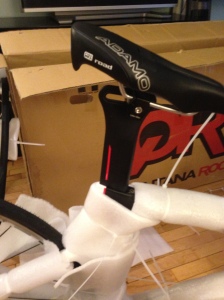 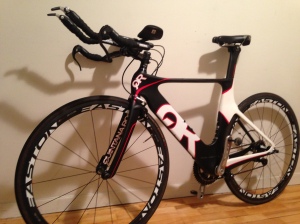 Luckily for me Ryan and I had discussed marking the bike off with electrical tape so when I opened the box I could match the measurement he had so pains-takeningly set out. I don’t think many bike shops, online stores, or people would go through all this effort for someone they have never met.

Now all I needed was a break in the weather so I could take Foster’s (yeah I named my bike, she is Austrailian and enjoys drinking beers named after her) out for her inagurial ride. Eventually I got the break I was looking for and pushed off from the curb to find heaven again. 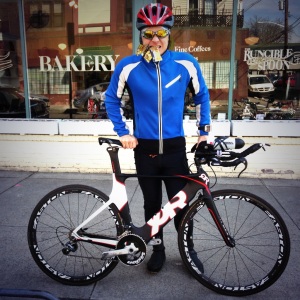 The joys of riding in comfort instantly came back to me. I couldn’t be more thankful for the experience and care Ryan and the Rev3 MultiSport gave me. Thanks guys!

Are you a bike dork like me and named your ride, share with us it’s name, origin and the significance of your ride?